Wow. I’m as stunned as all of you are to have heard my name called tonight. I did not expect to win this Oscar, especially since, until a few months ago, I wasn’t even aware that a person could be nominated for Best Adapted Screenplay for a movie based on a blog post. But I’ll take it. 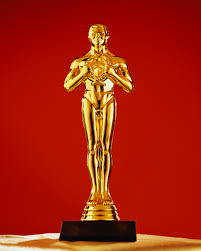 I guess I should take a moment to thank my business partner, mostly because of the lawsuit: part of the agreement was I mention him in any potential acceptance speech. So, this one goes out to my former friend and mentor, or as I like to call him, “Plaintiff.” I’d also like to give a special shout-out to the little people, and by “little people,” I mean anyone 5 feet 3 inches or shorter; thank you for making me feel tall.

In all seriousness, a lot of hard work went into the making of this film. I am humbled to have worked with such a great director and cast and crew and production team; I’d like to give most of the credit to them for bringing my words to life. I’d like to, but I can’t because, let’s be honest, without my script, this movie would have been nothing. Hence, me standing here holding this statuette and them all sitting at home cheering me on. So, thanks for your minor contributions.

I have to believe that my late mom is looking down on me and smiling. She was such a big part of my success; I can still hear her speaking the words that motivated me to get to where I am today: “Sweetie, don’t listen to what your teachers and the social worker and the school administrators say: You can be anything you want when you grow up. As long as it doesn’t involve being tall, or particularly good-looking, or especially intelligent, or having the ability to work with your hands, or playing well with others.” I knew then and there that I was going to be a writer!

I know, too, that my dad is looking down on me. He’s not dead; he just disapproves of my life choices. Dad, this one’s for you; you warned me that when I went to Hollywood, it would be filled with a bunch of whiny, narcissistic, ego-inflated, body-obsessed liberal wackos who spent their days puffing each other up in useless meetings and their nights at drug-fueled orgies in the Hollywood Hills. Well, Dad, you were right: it was everything you promised and more! Thanks for cutting me off financially; that really forced me to find my way in the world (and, unanticipated bonus, to find cheaper pot suppliers).

One of the greatest pieces of advice I got when I first starting working on screenplays came from two previous Oscar winners, Ben Affleck and Matt Damon. They told me, “Write what you know.” I’m paraphrasing from their legal filing; it was more along the lines of, “Whereas we find Mr. Dudley’s screenplay to have undeniable similarities to our own work,” etcetera. Boy, did I learn the hard way to write what I know. I suppose in hindsight I shouldn’t have named my first attempt at a screenplay “Good Will Hunting 2.” But that’s all been settled in the courts, and now I hold no grudges against Ben and Matt, who are both in the audience tonight. However, I would like to kindly suggest that they drop the order of protection requiring me to stay 50 feet away from each of them at all times; that’s why my seats were in the balcony and I had to find an alternative access to the stage from the backstage area when my name was called. (I’m also trying to figure a way to triangulate our paths through the Vanity Fair Oscar party, but I’ll cross that red carpet-covered bridge when I get there.)

Did I thank my agent yet? No? I owe a lot to her. (Twenty-five percent, actually; she told me that was the standard rate.) She had all the connections and taught me which parties to attend, which studio heads to schmooze, and, most importantly, which producers to sleep with. (As an aside to my wife: Just kidding, honey! And as an aside to certain producers: Not really; those two and/or three nights we spent together were some of the most memorable drug-fueled times of my life!)

I see that someone in back is giving me the “wrap it up” signal. Either that or they’re telling me that they are going to slit my throat when I step off the stage. Wait, is that Affleck? Aw, Ben, you’re a card! Always joking! Anyway, I would be a heel and a cad if I didn’t mention my lovely wife Jen. Jen, my darling, this is all possible because of you, in so many ways. First of all, the movie is named “My Lovely Wife Jen,” so there are some obvious real-life comparisons. I was particularly pleased when the casting director got Jennifer Lawrence and Jennifer Aniston to play you in different stages of your life, although I didn’t realize how powerful a player Aniston was until I found out she was playing the young “you” and Lawrence was forced to play the mature “you.” Also, Jen (my Jen, not the other Jens), thanks for always supporting me when things looked bleak. I’m talking about the financial support, because there were times when your emotional support was frankly a little lacking. I mean, how many times can a guy be criticized for not having a real, actual job and not getting changed out of his sweatpants all day (and, in one particularly low stretch, not doing anything but watching Seasons 1 through 4 of “thirtysomething” on repeat for 6 months straight while eating pork and beans on the couch) before it starts to affect his self-confidence? But we worked through all that, and I just want to say that everything I earn from this movie goes to you. That is, everything after paying my lawyers and Affleck and Damon and my former business partner and my agent. Everything after that, I mean.