A few years ago, I placed in the top 5 in a few local 5Ks. It got me thinking that, with the right training and focus (and the hope that the best runners oversleep and miss the starting gun), I could win one of these suckers.

Then I heard about a new race for a local charity. Excited, I told my lovely wife Jen, “This could be the one!” (I had been running sub-19:00, or under 6:05 per mile, not a stellar time, but maybe good enough.) The morning of the race, I went early to the starting area to pick up my race packet. As I was leaving the tent, I looked through the packet and said to one of the volunteers, “I’m sorry, but my race bib is missing.” The volunteer said, “That’s not a mistake. This is a fun run, a noncompetitive race. We won’t be timing it.” “Oh. Thanks,” I said.

I went home and told Jen, “It’s noncompetitive. What the heck am I supposed to do with that? I don’t think I even want to do this anymore. Plus, the shirt’s not even that great.” (This makes me sound like a whiner, but in my defense, the shirt wasn’t that great.) Jenny talked me off the ledge: “Just use it as a training run. Besides, you already spent the 25 bucks to register.”

So I went to the starting line a few minutes before the race was to begin. It was very foggy. Looking around at the crowd, I saw none of the usual group of guys and ladies who win the local races. (That was the plan; sometimes, newer races are less likely to draw interest from experienced runners.) As a matter of fact, I saw no one who even looked remotely interested in running hard, save for three 10-year-old boys. Then it dawned on me: All these people were here early on a chilly, fog-shrouded Saturday morning out of the goodness of their hearts to donate money and support a good cause. I was the only jerk who wanted to crush everyone else’s spirits. I felt really small. (Which is saying something for someone who is 5 foot 4.)

The gun went off, and the three 10-year-olds shot from the starting line as if they were running a 50-yard dash. Conveniently, after about 50 yards, I caught them. They stayed with me for the first quarter mile of the race, when two of them slowed down. The other boy ran with me until a half mile into the race when, suddenly, he came to a complete stop and started wheezing at the side of the road. Poor guy. I ran on.

Now it was just me out front, and for the first time I noticed that it was incredibly foggy. I mean the type of foggy where I couldn’t see more than two houses ahead of or behind me. Before the 1-mile mark, some guy was walking his dog when I appeared out of the mist. He yelled, “Is there a race, buddy?” I said, “Yeah.” He said with shock in his voice, “Are you winning it?” “Yes,” I said.

Just past the 1-mile mark, Jenny was there to cheer me on. Two women walking down the sidewalk saw her, then me, and yelled to me, “Is there a race or something?” “Yes,” I said. “Are you winning?” “Yes.” About a half mile later, a husband and wife were setting lawn chairs up in their driveway to watch the runners when I came upon them quickly from the fog. “Hey, where’s your race bib?” the guy yelled. “It’s noncompetitive; they’re not timing,” I said. He turned to his wife as she sat down and said, “It’s noncompetitive.” She groaned. “Hey,” the guy said to me, “Are you winning?” I said, “Can I just run the race without having these long conversations?!?” but he didn’t hear me as I had disappeared into the fog.

Here’s the thing about leading a race: It’s not easy. It can be nerve-wracking. Even in a race where I was near certain that no one could catch me, I ran scared. It had always been so easy to start off relatively slowly and reel people in as a race progressed. Now, here I was, exactly where I thought I wanted to be, and I didn’t like it. I couldn’t handle the pressure.

At about 2.5 miles, I came quickly upon Jenny in my small window of visibility. “Is there anyone even close to me?” I yelled. “There wasn’t anyone even within 2 minutes of you at the first mile. Frankly, this is boring.” So with that little pep talk, I surged ahead and ran to the cheers of the volunteers near the finish line. I crossed in 19:50, not even close to my best time that year. The race director looked over my shoulder at my watch and asked, “How’d you do?” 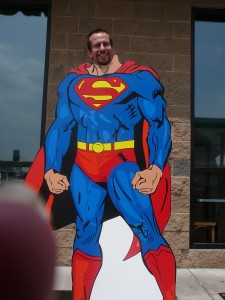 This is how I felt when I finally won a race. Bottom left: my lovely wife Jen’s thumb.

Since then, I’ve won two more races, one a 5K in my brother’s town, and another a 10K on country roads in blistering heat. Those are stories for another blog post. The thing about these races, though, is that they weren’t my best efforts and were not my most enjoyable experiences. (Other than allowing me to humblebrag on Facebook.)

I had a point, and I’m trying to remember it. Something about winning not being all it’s cracked up to be. Actually, it was pretty cool to cross the line first. But I could have done without the disbelief in everyones’ voices when they yelled out, “Are you winning?”