Let’s get straight to it: You don’t have time to read a blog post about the joy of traditions and family and giving thanks for whatever it is I’m thankful for. I’m here to rank traditional Thanksgiving dishes by order of enjoyment. Judged by me, the expert.

What makes me an expert on Thanksgiving? I’m glad you asked. These are my qualifications: 1. I am an American, last time I checked. 2. I eat food.

The Ultimate Ranking of Thanksgiving Dishes (from Best to Worst)

2. Pumpkin pie. Illinois is the top pumpkin-producing state in the nation. Around 90% to 95% of all pumpkins used for canning are grown in Illinois. In fact, in 2012, Illinois produced twice as many pumpkins as the second-leading state, California. (Oh, snap! Now California has a pumpkin inferiority complex!) I totally did not make up this information; it came from The Illinois Farm Bureau and the University of Illinois Extension.) None of this explains why I love pumpkin pie, though. I have a secret ingredient for making awesome pumpkin pie. (Is the secret ingredient “love”? It might be.)

3. Cornbread. One of my old flames taught me how to make delicious cornbread. Her name is Betty Crocker. Oh, you’ve heard of her?

4. Stuffing. An in-law of mine makes a sausage-based stuffing that is to die for. On the years that we don’t get together with that side of the family, Jen gets a twitchy look in her left eye that speaks directly to me: “Find. That. Recipe.” 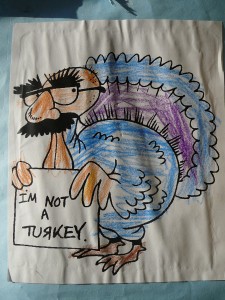 This was either colored by my son during his preschool years or painted by Picasso during his Blue and Purple Turkey Period.

5. Turkey. Of course turkey was going to be in my top five. But I am ambivalent about it. I enjoy it when properly cooked. I have improperly cooked it many, many times. I’m getting better. My father-in-law loans me his electric carving knife when I host Thanksgiving; he makes me do the carving because he is testing my manhood. The first time he made me do it, things didn’t go so well. (I believe my final words after having gotten the knife stuck in the skeleton of the turkey were, “Mommy! Make it stop!”) I’m getting better.

6. Whipped cream. Can this be a separate entry?

7. Cranberry sauce (not canned). I make a cranberry swirl bread that is so time-consuming that, frankly, I would rather just prepare the cranberry filling and eating it. (Cranberries and sugar; it’s a beautiful thing.)

8. Cranberry sauce (canned). Jen prefers the jellied cranberry sauce.  I use it in the days that follow Thanksgiving on a leftover-turkey sandwich. I’m a little creeped out by the metal-can shape it holds when it slips out of the can. 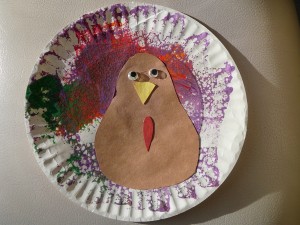 Our youngest, light of our lives, did this one. We pull this artwork out of storage every year, to embarrass them. Now it’s on the Internet. Forever.

9. Black olives/gherkin pickles. My dad was a big fan of these food items, so they always had a place on our table at the holidays. My siblings and I would put five olives on a hand under the table and then wave at each other with them before our beagle, Tiger, would eat them off of our fingers. My mom was under the impression that we ate the olives. Please don’t feed your dog olives; they are probably not good for dogs in large quantities. (But Tiger had an iron stomach and lived for 15 years.)

10. Bread rolls. Because dinner wasn’t filling enough already. I only ate them because, being the youngest in the family, I never knew when the food would run out before it got passed to me. (This explains so much about my personality; I should really be sharing this stuff with a therapist and not with the Internet.) 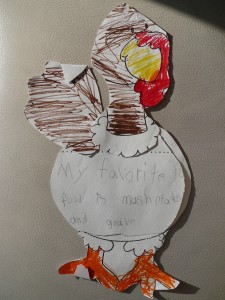 My middle child drew this. “My favorite food is mash ptados and grave.”

Why are the mashed potatoes black? Because the white crayon wouldn’t show up on the paper. Obviously.

11. Mashed potatoes/gravy. I know I am in the minority here when I say that I’m not a big fan. There have been times when one of my kids ate only mashed potatoes for Thanksgiving. Just a big plate filled with white slop and brownish sludge. I don’t have time for something that doesn’t have sugar in it.

12. Mincemeat pie. Is there actually meat in it? Does it have to be minced? Can it be diced or chopped? Again, my dad likes it, so I defer to him on this. Turns out, according to Linda Stradley of What’s Cooking America, this was a way of preserving meat in the 11th century. According to an English cookbook from 1545, “Pyes of mutton or beif must be fyne mynced and ceasoned wyth…” I’m sorry, I have to stop. That sentence is all kinds of annoying for the editor in me. Didn’t people know how to spell in 1545? (By the way, canned mincemeat nowadays might only have dried fruit and spices, but there are animal fats in it.)

13. Green bean casserole. Oh dear God. Please keep this “food” off of my Thanksgiving plate. I know that there are a good many people who absolutely adore this stuff. You can’t explain taste. But I will try: I believe that these people are missing taste buds. This was an annual tradition at the Dudley house; it is part of the reason I got married so young and moved out. This wasn’t even one of the original dishes passed around at the first Thanksgiving: it was actually invented in 1955 by the Campbell’s Soup Company. Cream of mushroom soup, green beans, French fried onions. General rule: If you would never eat two or more ingredients in a recipe by themselves, you shouldn’t eat all of them slopped together.

So that’s my ultimate list. I know I left off some dishes that others might traditionally have at their Thanksgiving feasts (e.g., collard greens, apple or pecan pie, deviled eggs, turducken, pepperoni pizza, leftover Halloween candy), but I don’t have time for arguments now: as we speak, my father-in-law is cleaning his electric carving knife.