My lovely wife Jen and I were out on a walk, talking about the marathon I was going to run that weekend. I was going over my clothing options for race morning. Dressing appropriately for a race that will take (for me) 3½ hours is tricky; typically, the marathons I run are in the spring and fall, and the temperatures can rise 20 or more degrees during the course of the race.

“I am definitely going with the shorts,” I said. “Maybe a short-sleeve. Weather Underground’s website says it will be 39 degrees at the start and rise to 51 by the finish; maybe I should go with a long-sleeve shirt and a T-shirt over it. Then the gloves, a baseball cap, and maybe my neck warmer. But then again, I might not need the long-sleeve. What do you think?”

Jen said, “I think you’ve crossed the line and gone over to Crazy Town. Just do what you always do and stop obsessing about it!”

She had a point. But in my defense, I haven’t gotten this far in life without a few side trips to Crazy Town.

I was running in the Naperville Marathon, a relatively small race. My previous ones were all big-city marathons, and consequently, they had big marathon expos at convention centers. A marathon expo is where you have to go to pick up your packet with race bib, free shirt, gear-check bag, etc. If you’ve been to an industry expo or a college fair, you know what these things are like: vendor booths, free samples of frozen yogurt or another trendy food item, people generally harassing you into visiting their booths. This one was similar but with one big difference: it was teeny-tiny. The first clue was that it was being held not in a convention center but in the back room of a health club.

The health club was about an hour from my house, so I drove there 2 days before the race.  I wanted to do a quick get-in, get-stuff, get-out trip, but first I needed to ask some questions at the Information desk. The nice lady at the desk said I could ask her anything I wanted.

“Great,” I said. “I notice that there are parking garages a few blocks from the starting line. How soon before the race do they fill up? I’m trying to avoid having to use the remote parking.”

“This is my first time volunteering at this marathon. I’d guess 6 a.m., maybe? Any other questions?”

“Um, no, I’m good.” I did have other questions, but seeing as my guesses would be as good as hers, I saved them.

Flustered, I went to the packet pickup table and got my goody bag. The guy at the table looked at my packet, yelled, “Men’s small!” to the volunteers behind him, and grabbed the shirt they handed him. Into my bag it went. I had already seen a photo of it online and decided it wasn’t really my style, so I hadn’t planned on keeping it; but hey, it was a free shirt. (Editor note: obvious foreshadowing ahead.) Usually, I would spend some time looking through my packet and verifying that everything is there and that the shirt is the correct gender/size, but I was in a hurry.

When I got home, Jen was back for lunch. Like a little kid showing off Halloween candy, I said, “Look at what I got!” I took out the marathon shirt and held it up for her to see. 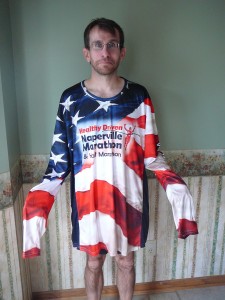 I am pretty sure this is not my size. Please note: I am actually wearing shorts. As far as you know.

“What the?” I looked at the tag: Men’s XXX-Large. “Are you freaking kidding me?!?” This thing was a dress on me, and my arms flapped in the too-long sleeves, like when Tom Hanks’ character turned back into a 12-year-old boy at the end of “Big” and he was still wearing a man’s suit. (Sorry to ruin the ending of that one for you.)

Jen said, “Don’t get upset. You had already said you weren’t going to keep it. And don’t drive back to the expo for a replacement shirt.”

She was right, but it was the principle of the thing that ate at me. I mean, seriously. How did they get this one wrong? Plus, is there really that much of a demand for XXXL shirts at a marathon? I didn’t see any 6-foot-5-inch, 400-pound runners out there on Sunday morning. And did they accidentally give my small shirt to that guy? (“Hey, why did they give me a handkerchief instead of a shirt?”)

On race morning, we got there around 6. (Guess what? There was plenty of parking in the parking garages.) It was freezing; Jen didn’t want to hang around the starting line, so I wore some throwaway clothes. We have a “donate” box in our bedroom, and anyone who is retiring clothes in our family knows to throw them in the box; then I run it to goodwill when it’s full.  Anything that remotely fits me ends up in my “marathon throwaways” pile. At the starting line of most major marathons, spectators aren’t allowed near the runners, so it’s best to have clothes that you throw out just before the gun sounds. The marathon organizers then collect them and donate them.

There was plenty of space for spectators at this race, but Jen went to stake out a spot a few miles into the course. Unfortunately, the only long bottoms in the donate box were pink flamingo-covered pajama pants. (I’m pretty sure Jen retired them just to see me wear them to a marathon. And no, I didn’t allow her to take a picture of me wearing them.)

This was how ugly they were: 5 minutes before the race started, I took off my ripped-up old sweatshirt and put it on the fence around the starting corral. I then took off the pink flamingo pants; when I went to put them on the fence, the sweatshirt was already gone. I placed the pants down and moved further into the crowd. For the next few minutes, every time I glanced back, the pants were still there on the fence, crying out, “Take me! I am in need of a loving home!” As far as I know, they are still sitting forlornly on a sidewalk in downtown Naperville, waiting for a brave (or color-blind) citizen to claim them.

I won’t bore you with the details of my race. I wanted to run somewhere around 3:20 to 3:25; I went out at 3:20 pace for the first 20 miles, then faded in the last 6 and ended up at 3:27:12. (Sorry, I actually did bore you with the details.) The course itself was great, and the people of Naperville (Napervillains?) deserve a lot of the credit for supporting something that disrupted their Sunday morning for 6 hours. For a small race, there was great fan turnout, a beautiful course, and ample water stations throughout. If you are insane enough to run a marathon, you could do worse than this one. Bonus: Because there were so few people in the race, I came in 85th place. That’s the top 10 percent, about where I usually finish in a marathon, but much more impressive than telling someone that I finished 3,500th in the Chicago Marathon: “Not to brag or anything, but I was in the top 100. And what have you accomplished with your life?”