Faithful readers of my blog (all three of you; you weirdos), here’s the list of favorite movies I saw in 2015. Just a reminder: These are not the best films released last year. These are the best movies I saw last year; they could have been old or new, but I just happened to see them in the calendar year 2015. I saw some movies that were released in the last month (Star Wars: The Force Awakens) and some that were released decades ago (Butch Cassidy and the Sundance Kid). They only qualify for my list if it’s the first time I have seen them. For example, I watched the original Star Wars trilogy for the twentieth time in anticipation for Episode VII, but they would have been on my list in 1977, 1980, and 1983.

If I had a blog back in ’77, my list of faves would have looked like this (remember, I was 6 years old): Star Wars, Close Encounters of the Third Kind, Saturday Night Fever, The Rescuers, Herbie Goes to Monte Carlo, Oh, God!, The Many Adventures of Winnie the Pooh, The Bad News Bears In Breaking Training, Pete’s Dragon,  and Race for Your Life, Charlie Brown. 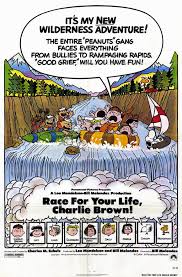 Honestly, the Charlie Brown movie may have had as big of an impact on me as any of the Star Wars films. I have such a vivid memory of sitting in the front row of our hometown theater, which had been built in 1925 and had yet to be chopped up into four smaller screens, and staring wide-eyed at the adventures of Charlie and his pals as they tried to survive life at Camp Remote.

Anyhoo, here is the list. If you’ve been following me (since 1977), you’d notice my taste in movies: no horror flicks and very few big-budget blow-’em-up action films; lots of indie films and comedies. My lovely wife Jen doesn’t have as much free time as I do, so she only sees movies in her wheelhouse (dumb comedies, romantic comedies). I filter out all the other dreck to save her some time. I often watch a movie and think, “Would Jen want to sit through this?” Strangely, I didn’t have her see all the movies on my list.

10. “Young@Heart,” 2007 documentary directed by Stephen Walker and Sally George. This touching film is about the Young@Heart Chorus, a singing group whose members’ average age is 81. Also, they sing punk, rock, and other songs you wouldn’t expect from them. Funny and heartbreaking.

9. “Alan Partridge,” 2013 comedy directed by Declan Lowney and starring Steve Coogan and Colm Meaney. Steve Coogan is one of those actors whose films I gravitate to (Simon Pegg being another). Alan Partridge is a character he has played for years on British TV. The plot: A corporate conglomerate has bought out the radio station where Alan is a DJ, and one of his disgruntled co-workers takes everyone hostage to protest. Bonus: This film contains the single funniest scene in a movie I saw last year, wherein Alan attempts to escape through a window.

8. “Argo,” 2012 drama directed by Ben Affleck starring Affleck, John Goodman, and Alan Arkin. Some of this movie was hard to watch because I remember the Iran hostage crisis and how miserable a time in our nation’s history it was. (See, this is why I usually stick with comedies.) Affleck balances deftly the tension and humor in this little-reported story of a joint US-Canadian effort to save the lives of six Americans holed up at the Canadian embassy using the ruse of a Hollywood film crew scouting locations for a sci-fi movie.

7. “Obvious Child,” 2014 comedy-drama directed by Gillian Robespierre starring Jenny Slate and Jake Lacy. A comedy about abortion? One of three movies on my list that I greatly hesitate to recommend. Slate is such a fresh voice in this charmer about a young woman dealing with the aftereffects of a one-night stand. Plus, Polly Draper, who was Ellyn in the TV show “thirtysomething,” plays her mom. Yowza!

6. “While We’re Young,” 2014 comedy-drama directed by Noah Baumbach starring Naomi Watts, Ben Stiller, Amanda Seyfried, and Adam Driver. Painfully funny story of a couple in their forties who fall in with new friends, a twentysomething couple who makes them feel younger but also makes them question how little they have accomplished so far in their lives. Which made me question how little I’ve accomplished. Besides this blog.

5. “The Interview,” 2014 action comedy directed by Evan Goldberg and Seth Rogen starring Rogen, James Franco, Lizzie Caplan, and Randall Park. I know what you’re thinking: “Why, Dudley, why?” The second of the movies I hesitate to recommend. I swore I was never going to see this, especially after subjecting myself to “This Is the End,” which was (to me, but apparently not to others) unfunny, violent, and disgusting. This one was also violent and disgusting but funny! I laughed throughout. Do I have to explain the plot to the two of you who don’t remember the international incident that this film caused? Okay: a talk-show host and his producer score an interview with North Korean dictator Kim Jong-un, and the CIA tries to convince them to assassinate him. Best use of the song “Firework” by Katy Perry in a movie since “Madagascar 3: Europe’s Most Wanted.”

4. “Silver Linings Playbook,” 2012 comedy-drama directed by David O. Russell starring Bradley Cooper, Jennifer Lawrence, and Robert De Niro. What an original character Cooper played (Lawrence, too). There’s nothing funny about mental disorders, but Russell (who, in the DVD extras, talks about dealing with bipolar disorder in his own family) uses humor to tell the story of a guy and his family dealing with his release from a mental institution after his marriage falls apart.

3. “Boyhood,” 2014 drama directed by Richard Linklater starring Ellar Coltrane, Patricia Arquette, Ethan Hawke, and Lorelei Linklater. I am of the camp that believed this movie should have won the Best Picture Oscar last year over “Birdman,” which I liked (see my “Movies that just missed the cut” list below) but I found slightly pretentious in the “it’s a Film about Actors! and Directors! so it must be Important” way that usually goes over well with the people who vote for the Oscars. What happened in “Boyhood”? Not much, except a kid grew up. I could relate.

2. “Rudderless,” 2014 drama directed by William H. Macy starring Billy Crudup, Anton Yelchin, and Felicity Huffman. Hoo boy, did I struggle with this one. I didn’t even have Jen watch it; it’s too painful.  It is about something that most people will not want to see, and it tells a side of the story that most people won’t want to hear, and yet it is redemptive and (at times) funny and surprising, and the original songs are great. The plot: Crudup plays a guy whose son dies in a school shooting (are you still with me here?). His life falls apart. Then he discovers his son’s unrecorded music and starts performing it, passing it off as his own (did I lose you yet?). Please don’t see this and be mad at me if you hate it. I’m not recommending it for anyone else, but it moved me more than any other movie I saw. I admire Macy for choosing this subject matter for his directorial debut.

1. “Star Wars: The Force Awakens,” 2015 sci-fi directed by JJ Abrams starring Daisy Ridley, John Boyega, Carrie Fisher, and Harrison Ford. You may have heard of it. Yes, I was a Star Wars kid growing up. I can’t defend the derivative plot, but I had more fun watching this movie than any other. I laughed, I cried, I was surprised. I will probably see it again.