Now that we are moving on to spring here in the Great Midwest and winter’s worst sting is over (am I jinxing myself on that one?), I can stop worrying so much about my long winter training runs. See, the problem with running a spring marathon is that I do all of my running outdoors. I prefer to run on this canal towpath near our home, but snow tends to linger on it, and snowmobile tracks that freeze over can be ankle breakers. Plus, do I have to mention the dog poop hidden under the snow cover? (Four sentences in and already I am using the word “poop.” My college writing professors would be proud.)

I run outside in winter for two main reasons: 1. I am a tough guy (have you seen me? I thought this one was obvious), and 2. I have a horrible treadmill. It is about 40 years old and is “manual,” meaning that it only moves if you slide your feet on it. This leads to an unnatural running stride. (And please don’t tell me to join a gym or buy a new treadmill; you obviously haven’t read my “I Am a Notorious Cheapskate” blog post yet.) 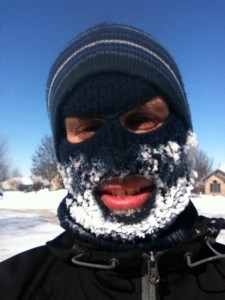 That’s my breath and not drool that froze on the ski mask, I swear. Note the knit cap on top of the ski mask; that’s so my brain doesn’t freeze.

If there is a lot of snow on the ground, I am better off running on city streets, although that means I have to deal with traffic. I try to run against traffic, make myself visible by wearing clown clothes, and make eye contact and wave to every driver. (If you’ve seen me, I’m not so much waving “hi” as waving “thank you in advance for not putting me through your windshield.”) Because of the ice and snow, I have to run by “feel” rather than by time. I tried training at specific time paces one winter, and it was a disaster: knee problems and IT band injuries led me to fall far short of my marathon goal time.

The hardest part about winter running, though, is developing that “whatever it takes” attitude and not allowing the weather to play too big of a role in my training. Whether it’s 0 degrees or snow is falling or the plows have already come and it’s icy, the running has to be automatic. If I waver and think, Maybe it will be nicer outside tomorrow, I’ve lost the mental battle.

The number one way to deal with outdoor conditions is to dress properly. I’ve gotten to the point at which I am usually overdressed. Not suit-and-tie overdressed; that would be weird. Rather, I wear extra layers and can strip some off if I need to. I have a rainproof windbreaker that I can wear in all kinds of weather; it’s the most important item in my closet. I also like to keep my neck warm, so I wear an ear warmer headband around my neck. If it is 20 degrees or nicer, I go with one thin pair of gloves. Anything colder, and I have two warmer sets of gloves that do the trick.

During a typical marathon training cycle (about 20 weeks or so), I try to get in four runs of 18 miles or longer. Many training programs will have you run just once at 20 miles, on the theory that if you can make it 20, you can make it 26.2. But I have struggled with those final 6.2 miles, so I try to do a step-up plan where I add 2 miles to my longest run every third week: 16, then 18, then 20, 22, and 24. (Coincidentally, I am supposed to be doing my 24 today, but it is raining with potential lightning outside, so here I sit, typing.)

A few winters ago was historically cold for this area. I remember forcing myself to run, pretty much so I could humblebrag about it on Facebook (e.g., “Went running while it was 8 below! Time to use a hair dryer to unfreeze my contact lenses from my eyeballs!”). On my longest training run that winter, I planned on doing 20 miles, but the snow was falling, it was 10 degrees out, and there was deep packed snow on the towpath already, so I did a circuitous route around our town’s streets. I was wearing my hydration belt, which has two water bottles and a pocket for gels. (I use Gu Gel; my favorite flavors are vanilla and root beer.) I also carried a Gatorade bottle.

About 10 miles into the run, a few things came to a head: First, the snow was accumulating around the bottom of my running pants and then freezing, weighing down my pants and forcing me to stop to retie the pants so they wouldn’t fall off. (That would have been a sight.) Then, my water bottles started to ice up. Initially, I could shake the bottles to break up any slushy parts, but it got worse until they completely froze on me. I don’t know if you’ve ever had the chance to run with two freezing-cold bottles of ice bouncing up and down on either side of your groin, but I wouldn’t recommend it. (Unless you’re into that kind of thing; I don’t judge.)

My cold groin and all the bouncing made me have to go to the bathroom really, really badly. Anyone who has taken a road trip with me knows that I have the world’s tiniest bladder anyway. Usually, I can sneak off into the woods next to the towpath; the whole forest is my bathroom. (Hey National Forest Foundation, here’s your new slogan: “The whole forest: it’s your bathroom.”) But on this particular day, I was running on city streets. I quickly calculated two options for public restrooms open on a Saturday morning: the library and the hospital. I settled on the hospital, mostly for logistical reasons: it was about a half mile closer to where I was than the library. I practically sprinted to the hospital and went through the front entrance. A volunteer at the information desk asked me if I needed anything (besides the obvious shower after a long run) and quickly pointed me toward the men’s room. I waited around for the water bottles to thaw, but it was taking too long.

By that point, my run had completely fallen off the rails, so I walk-jogged home. It would probably not surprise you to find out that I did not meet my goal pace in the marathon that I ran in the spring. My point is, I have been much more consistent with my training this winter, and Mother Nature has cooperated. Any failure to meet my goal this year is on me. At least, until I can think up something else to blame it on.