“Hey Dudley, when are you going to post your list of favorite movies from 2016?” is a question that exactly zero people have asked me. Well, too bad, it’s my blog! Just a reminder: These are not the best films released last year. These are the best movies I saw in the last calendar year, whether they were new or old. I’m almost embarrassed to say that, of the 87 movies I watched in 2016, only one was in a movie theater, and that was in late December. This means I streamed a ton of films into my living room and watched them by myself (I like to call it “Netflix and no chill”). See, my lovely wife Jen would rather spend her time reading books or going to work than sitting and staring at a screen (she’s weird like that). So it’s usually me alone, watching a movie and thinking to myself, Great job on another 2 hours well spent, Dudley! Add that one to the list for the blog!

But I’m okay with that if you are. Here is my list. Remember, just because I liked them doesn’t mean that you will. And vice versa; I mean, you probably liked some of the films I left off the list (e.g., “A Walk in the Woods,” “Ant-Man,” “Neighbors 2″). Clearly, we have different tastes. I’m not saying mine is better; I’m just mumbling it behind your back.

10. “My Architect,” 2003 documentary directed by Nathaniel Kahn. Louis Kahn, a celebrated architect who died in the early 1970s, had three separate families that he kept from one another. His son travels the world visiting his father’s colleagues, family members, and buildings he designed, trying to find out more about his father. Sad and redemptive; at one point, a relative challenges him to prove that he is his father’s son, and Nathaniel Kahn, obviously used to this sort of questioning from his father’s family, pulls out the birth certificate that he always carries with him.

9. “What If,” 2013 indie comedy directed by Michael Dowse starring Zoe Kazan and Daniel Radcliffe. Harry Potter in a romantic comedy? Yes please! Radcliffe is a medical-school dropout moping about his failed engagement; he meets Kazan at a party, and they hit it off. The only thing standing in their way is her boyfriend. Wizardry won’t save you now, Harry Potter! Yeah, he’s never going to outgrow that.

8. “Super 8,” 2011 sci-fi directed by JJ Abrams starring Kyle Chandler and a bunch of child actors you’ve never heard of. Abrams wanted to make a film in the spirit of early Steven Spielberg (who is the executive producer). A group of children spend the summer of 1979 running around and making movies. Late one night, they sneak out and accidentally capture a military train crash on film, leading to an investigation of unexplained events happening in their town. I remember seeing “E.T” in a Texas theater in 1982 while on vacation; this movie brought a lot of the memories of that movie and that time back.

7. “Gravity,” 2013 sci-fi drama directed by Alfonso Cuaron starring Sandra Bullock and George Clooney. Every year, there are movies that I hear so much about that I’m like, Screw that, I know everything about that flick and won’t want to sit through it. I don’t know why, then, that I watched this much-talked-about film, but I did. I couldn’t get it out of my mind afterwards. I’ve always hated thinking about deep space; it makes my brain hurt. Still does, but what a powerful film.

6. “How To Be Single,” 2016 romantic comedy directed by Christian Ditter starring Dakota Johnson, Rebel Wilson, Leslie Mann, Damon Wayans Jr., Jake Lacy, and Anders Holm. I am a sucker for twentysomething, “I don’t know what I’m doing with my life,” relationship movies (see “What If” above). This ensemble comedy follows Dakota Johnson’s character as she navigates the wacky world of dating in New York in the 2010s. It’s better than I describe it; and for the second year in a row, Jake Lacy fills the nice-guy role with great comic timing (last year’s “Obvious Child”).

5. “Rogue One: A Star Wars Story,” 2016 sci-fi directed by Gareth Edwards starring Felicity Jones, Diego Luna, Donnie Yen, and Riz Ahmed. Look, I get that people who don’t like the Star Wars universe hate hearing about it all the time. And I’ll be honest, after first seeing this, I said out loud, “That wasn’t my favorite Star Wars movie.” But then it stuck with me, the way “Gravity” did and the way other movies that aren’t exactly all rainbows and sunshine can. It effectively carried the story up until the moment the original “Star Wars” began. And now during trying times, I find myself muttering under my breath, “I am one with the force, and the force is with me…”

4. “Mortdecai,” 2015 mystery/action comedy directed by David Koepp starring Johnny Depp, Gwyneth Paltrow, and Ewan McGregor. I watched this silly movie and immediately made Jen and my daughters watch it. I’m not usually a fan of all of Depp’s goofy voices, but to hear him with a marble-mouthed upper-crust British action, and to hear Paltrow’s accent, made this movie worthwhile. Based on the late Kyril Bonfiglioli’s novels about Charlie Mortdecai, art dealer and scoundrel, this one follows Charlie as he and his wife attempt to solve a crime caper involving stolen art. I giggle thinking about Paltrow gagging when she attempts to kiss Depp with the handlebar mustache that she hates.

3. “Love & Mercy,” 2014 drama directed by Bill Pohlad starring Paul Dano, John Cusack, Elizabeth Banks, and Paul Giamatti. I didn’t think it would work having Dano and Cusack play Beach Boys singer/songwriter Brian Wilson at different ages, but it does. I thought I knew the story of how Wilson suffered from mental illness and then lived under the control of his psychologist, Eugene Landy, but I didn’t really understand what was going on. Effectively shows what it’s like inside the head of a haunted musical genius. This is a truly American story of love, loss, and redemption; we love a comeback tale. 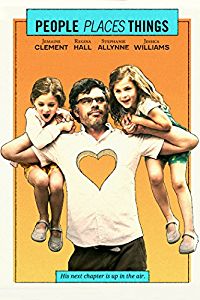 1. “People Places Things,” 2015 romantic comedy directed by Jim Strouse starring Jemaine Clement, Regina Hall, and Jessica Williams. This movie came and went quickly. If you recognize Clement, it’s probably from the TV series “Flight of the Conchords.” Here, he plays a newly single father of twins in Brooklyn struggling to raise them while dealing with the breakup of his marriage, teaching art and animation to college students, and working on his own graphic novel. Funny and sad. Sometimes very funny, sometimes very sad. It’s my favorite movie of the year because it was so unexpected.