I’ve been watching a lot of indoor track and field on TV and the Internet lately (it’s a cry for help, really), and it’s making me nostalgic for my indoor track days. And when I say “nostalgic,” I mean that I never want to relive the embarrassment of being a 14-year-old in 1980s short shorts again. 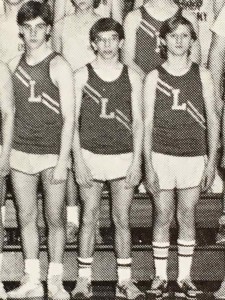 Who’s that  handsome fella in the middle? The “L” on my singlet does not stand for “loser.” By the way, I am thrilled to be a freshman.

First of all, I didn’t even want to do indoor track, and definitely not distance events. My older brother was a distance runner, so I wanted to carve my own mark. (I ended up switching to distance my junior year because it was clearly where I belonged.) Plus, indoor tracks are notoriously small, and I didn’t want to run in so many circles. A standard outdoor track is 400 meters per lap, or about 4 laps to a  mile. However, indoor tracks are always much tinier. I’ve never seen a 400-m indoor track; good ones are 200 meters, or 8 laps to a mile. My high school looped a track around the main gymnasium, and it came out to something ridiculous like 11 laps to a mile. I’ve seen worse.

(Note that I use “mile” when I refer to 1600 meters; in the 1970s, most states switched to metric distances in high school events, and nowadays most high schools are running 1600-m races instead of the mile, which is 1609.3 meters. Just to clarify for you statistics nerds.)

So I decided I was going to be a sprinter. My best friend on the team, Keith, also wanted to run sprints; we went to the first practice as freshmen together, all wide-eyed and hope-filled in February. All the sprinters gathered along the wall as the sprinting coach, Coach Turnbull, stomped in to deliver his opening remarks. (His last name was actually Turnbull, and he was terrifying. I probably don’t need to mention that he had a crewcut and coached football in the fall.) Unbeknownst to us, the best sprinter on our team, who was a senior, had just informed Coach Turnbull that he was skipping track to focus on his studies because he was going to be a quarterback on an Ivy League football team after graduation. Coach T was not happy about it and took it out on the rest of us. The welcome speech went something along the lines of, “Brian doesn’t want to hurt his precious little fairy arm and is going to sit at home on his computer doing homework instead of being a real man!” and got worse from there. We ran extra laps, apparently to punish Brian for his selfishness.

Boys and girls shared the track, and on cruddy-weather days, even the distance runners were stuck inside running endless loops around it. It got crowded. Generally, the faster runners are given the inside lanes and the slower runners stick to the outer lanes. One day after a grueling workout, Coach T told us to get off the track and hit the showers. I was chatting with Keith, walking from the infield (the inner part of the track) to the exit doors, when I heard some girls yelling, “Track! Track!” I thought, That’s strange, we all know we’re at a track; I wonder what that means. After more screams, I turned around to find about 15 girls barreling down on Keith and me, hair flowing, determined looks on their faces. One of them lowered her shoulder into my chest and sent me sprawling across the track. She kept running and yelled at me over her shoulder, “When we yell ‘track,’ it means you get off the track, freshmen!” Duly noted. On the bright side, at least I got the ladies to notice me.

Here was something unique about our indoor track: It was made of this rubbery material that I guess helped make the basketball court in the middle of it be bouncy, but it was really slick. Since we couldn’t wear spikes on it, we had to have shoes with good traction to keep ourselves from slipping around turns. We had to practice block starts for the sprints. The starting blocks are these metal thingies that have one long piece of metal in the middle and adjustable foot pedals on which to push off your feet at the sound of the starter’s pistol. There’s a whole science of blasting off from starting blocks; see Usain Bolt for details. (Not to toot my own horn, but I was a  pretty good block starter; I was the fastest out of the blocks and for the first 10-15 meters compared to everyone on my team. If only the sprint races were 10 meters long instead of 50 or 100.)

The starting blocks came with spikes that kept them in place on outdoor track surfaces; but because we weren’t allowed to use spikes in the gym, the starting blocks had to be supported by another person. Keith and I paired up and grabbed some blocks. I went first. Keith braced the block by standing on top and putting all his weight on it. I took off from the blocks and got used to them.

Then we switched. Here’s where we ran into trouble: Keith was about 6 feet tall and 180 pounds, and the freshman version of me was 5’3″ and 110 pounds. (Don’t worry, I’ve filled out over the last few decades and added an inch and a half and 10 pounds to my frame. I’m huge now.) Even a basic knowledge of physics would have come in handy: large Keith could nonchalantly stand on the blocks and my small force in driving off of them with my legs didn’t make them budge. What I should have done was sit behind the blocks for large Keith and put my feet and all my small weight against the back sides of the blocks. But I didn’t; there I stood on top of the blocks like the grinning idiot that I was, waiting for Keith to push off. I can only assume that it was a coincidence that the whole girls track team was looking over when Keith started. Or tried to start: When he pushed his legs back on the blocks, there was very little resistance from my weight holding them in place. Consequently, his feet slid straight back and he ended up on his stomach. Meanwhile, his force whiplashed me sideways, and I hung in the air for a split second like Wile E. Coyote hovering over a cliff, my body in a perfect line parallel to the ground, before I came crashing down on Keith’s backside.

I looked over at the girls track team and gave them the most relaxed “Well, hello, ladies” look I could muster before my teammates started in with a slow clap and someone said, “Nice job, freshmen!” I clambered off Keith, who said to me, “We must never speak of this.” (Sorry, Keith; readers of my blog deserve the unvarnished truth.)

We also practiced relay handoffs. A relay team consists of four runners, and each one has to carry a metal baton. The baton has to be handed off in an exchange zone marked on the track. Any sooner or later than the zone, and the team is disqualified from the race. In sprint relays, this exchange has to be carefully choreographed, and the person about to receive the baton usually times his takeoff so that he runs and reaches back with one hand without looking at his teammate. The onus is upon his teammate to say something aloud to indicate when he should reach his hand back. (Our team yelled “blue!” and hoped that no other team used that word.) I was practicing with another big guy (look, I know they were all bigger than me), a football player named John who loved to be cool for the ladies. Since I was going to be the leadoff runner on our relay and John was second, we were getting the timing right.

Izod polo? Check. Feathered hair? Check. Jeff Spicoli facial expression? Check. Must be the 1980s! My freshman yearbook picture, 1986. Oh, what the ladies were missing out on.

After a few halfway-decent tries, Coach T told us to really turn up the heat and do it as close to full speed as we could. The thing about indoor tracks is that they are so small that you feel as if you are constantly turning left. So every time I came flying around, I was coming out of a turn, calling out “blue!,” and giving John the baton. So I got a running start, kicked into high gear, and ran as fast as I could toward John, who took off and waited for me to say “blue.” What I failed to do was to wipe the dust off the bottoms of my shoes, so that when I came off of the turn, my legs slipped out from under me on the rubber-surfaced track and I slammed down onto my side. Because the track was slippery, I kept sliding along the track, looking ahead of me at poor John. In his confusion about why I didn’t call out the signal and give him the baton, John came to a complete stop and looked back behind him. I can still see the look of shock on his face when he first saw nobody running toward him and then looked down to see me just as I swept under him and took his legs out, sending him crashing down on top of me. We slid together for another 10 meters or so. Another round of slow claps from our teammates, another special show for the ladies.

(Strangely, the only two girls that I dated in high school were runners; one of them witnessed all three of these events and still agreed to go to two dances with me. The other one transferred to our school a few years later, and I can only assume she wouldn’t have eventually married me if she had been on the track back then.)

Several years ago, our high school built a fancy, gleaming fieldhouse with an indoor track that puts their old one to shame. I only know this because some former teammates of mine told me about it. I’m surmising that the school purposely didn’t invite me back for the dedication.