Before I ran my most recent marathon, I was reviewing my last several marathons’ training plans and their outcomes to see what I could learn from them. (Lesson 1: When grabbing a Gatorade and a water at the same aid station, dump the water on your head and drink the Gatorade, not the other way around. I made that mistake around mile 20 of a hot race when my brain wasn’t firing on all cylinders, and I spent the rest of the race wiping the Gatorade from my eyes and feeling sticky in the head area.)

My original goal with marathons was a general notion that I would attempt to run a marathon before I was 40 years old. I worked with a guy who had done one for his 40th birthday, and I thought that if he could find the time to train for it, I could too. Then my lovely wife Jen and I started to have children, and I figured I should try it before the family was too big. I ran my first when I was 32. It was such a difficult experience that immediately after the race, I told Jen, “I am never going to run a marathon again.”

However, I was running a 5K several years later, and this guy showed up wearing a Boston Marathon jacket. I was only somewhat aware that Boston was unique because of its qualifying times, but I didn’t really know what that meant. So I looked it up and saw how fast I’d need to go, and I thought, I might be able to do that. (Boston’s qualifying times are age- and gender-graded; broadly speaking, if you are in the top 10% of runners in your age group, you will qualify. The times are listed at the Boston Athletic Association website.)

Because the Boston Marathon has a 10 a.m. start time and starts 26 miles west of the finish line, the participants have to be bussed out to the starting line, starting at 6 a.m. On the 45-minute bus ride during my first time running it, I was talking to a group of runners who were asking everyone how many marathons they had run. One runner: “This is my 25th.” Other runner: “I’ve done over 70.” Third runner: “I have completed 152 marathons.” Me: “I’ve done 2.”

So I started to think about long-term goals and the whole “Why do I run?” question. The short answer about why I run marathons is twofold: 1. Because I can. I don’t mean that glibly; I know people who can’t or won’t run, and I am truly grateful that I’m able to get out there and do something that I enjoy. I don’t take it for granted. 2. It’s gotten me through some pretty low points in my life. Recently I was talking with someone who had a bad marathon experience, and we were  marveling at how you learn more about yourself and your character from your worst races than you do from the easy ones. And I’ve had to lean on “this isn’t as bad as the time I had to walk-jog the last 12 miles of that one marathon” several times in my life.

I told myself I’d finish 10 marathons by the time I was 50 years old. That seemed reasonable enough that I could justify the time and expense to Jen: “I’ll only be crabby about 16 to 20 weeks per year if I spread it out over a decade!” Then I started accelerating the timetable (and controlling the crabbiness).  Now I’m working on new goals; nothing super-crazy like Dean Karnazes‘ 50 marathons, 50 states, 50 days plan, but a teeny bit of crazy sounds about right.

Here’s a quick look back at my first 10 marathons:

1. 2003 Chicago Marathon, 3:28:00. I always have about three levels of goals for a marathon. For this initial one, I had two: first, to finish, and second, to break 3 hours 30 minutes. It was a relatively warm October day, I had no idea what to expect, and at the end, I was seriously dehydrated. Jen found me after the race with blue lips and lethargy (“Blue Lips and Lethargy” sounds like the name of an early Cure album) and nursed me back to health with chocolate and gummy candy. 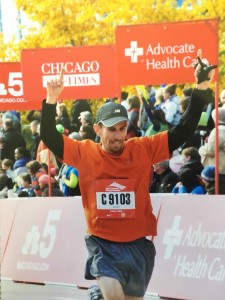 2. 2012 Chicago Marathon, 3:14:14. Note the 9-year gap between marathons. We went from one child to three, and it was getting harder to find the time to train. This was a cool October day, and I was attempting to reach my Boston qualifying time of 3 hours 15 minutes. I “banked time,” wherein you run a little faster at the beginning to build up a cushion (no one seriously recommends this method). I had a cushion of about 2 minutes with 6 miles to go. Then I ran 10 seconds slower than I should have. Then 30 seconds slower. Then another 30 slower.  It was panic time; for a fleeting moment, I had the thought that it would be okay if I didn’t reach my goal, but I refocused and pulled myself together for the last few miles. Incidentally, this is still my personal best. 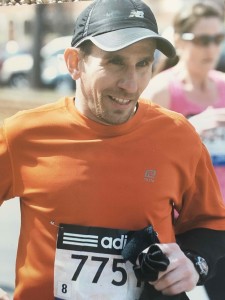 I was told that it would be cold. Turns out it was sunny and 50 at the starting line; I was hot the whole race.

3. 2013 Boston Marathon, 4:02:17. In the weeks leading up to the race, I had a nagging injury in my right hip that I couldn’t pinpoint. The whole Boston experience was great, and I was enjoying the first half of the race. Somewhere around the Wellesley scream tunnel (Google that), it felt as if someone stabbed me on the outside of my knee. The immediate, severe pain caused me to stop. It turns out I was dealing with iliotibial (IT) band syndrome; the IT band runs from the top of your hip to the outside of your knee, and it’s a very common running injury. I’ve since dealt with it on multiple occasions, but that first time is the worst. I ended up walking and jogging for the last 12 miles with a guy who owned a shoe store in California. If I had known how close I was going to be to 4 hours, I would have pushed it harder at some point. 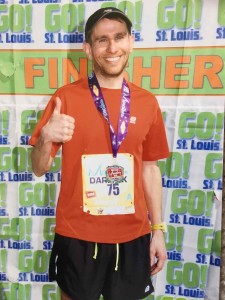 They were handing out toasted ravioli, cracker-crust pizza, and frozen custard at the finish line. That’s St. Louis style.

4. 2014 Go! St. Louis Marathon, 3:28:30. St. Louis was our home for 7 or 8 years, and the marathon ran right past our old hangouts. After running in two of the largest marathons in the world, I was surprised by how  mentally challenging it was to run a smaller marathon: there were 11,000 runners in the combined half and full marathons, and around mile 10, the 8,000 half marathoners split off and headed for the finish line; there was an immediate vacuum of energy and crowd support after that. It really felt as if I was running alone for the next 16 miles. I would periodically latch onto people, but I didn’t really know how to run a marathon without a large group around me. Plus, there are tons of small hills throughout St. Louis, and I faded in the last few miles. 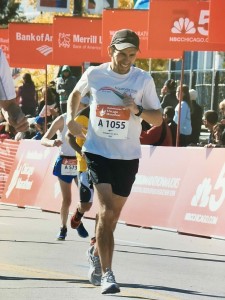 Look at the grit and determination on that face! (I had to go to the bathroom.)

5. 2014 Chicago Marathon, 3:20:10. This was the first time I attempted two marathons in one year. I was going for another Boston qualifying time; I had moved up to the next age group, so I was shooting for 3 hours 25 minutes. In the days leading up to it, I told Jen, “I feel good, as if I could go for 3:10.” She said, “Why not go for 3 hours?” So, casting aside all of my training and mental preparation, I decided on a whim to latch onto the 3-hour pacing group. (Many large marathons have pacers for certain time goals.) So I fell into a 6:52-per-mile pace for the first 13 or 14 miles and felt great. At mile 14, I slowed for a second to take in some GU gel and water; when I tried to catch up with the pacer, I had nothing left in me. The rest of the race was a slog; I ran the second half a full 20 minutes slower than the first half. Amateur hour. But I still qualified for Boston.

6. 2015 Naperville Marathon, 3:27:18. This small race had very few hills, but they came at inopportune moments. The last one was a steady rise coming out of an underpass, and it kicked my butt. I was starting to accept that I was a mid-3:20s marathoner, and that the one sub-3:15 was an outlier. 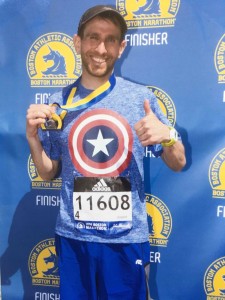 Jen made me wear the shirt so that she could pick me out of the crowd. The whole race, I heard, “Go Captain America!” from the spectators.

7. 2016 Boston Marathon, 3:28:53. An acquaintance who had done Boston several times told me, “Just take it easy and enjoy the sights and sounds until after Heartbreak Hill (mile 21), and then see what you have left.” So I decided to try that, and it felt much better than running at breakneck pace. Perhaps my most enjoyable marathon to date.

8. 2016 Starved Rock Country Marathon, 3:27:53. This was 26 days after Boston, and I signed up because a friend told me the race organizer was considering not holding it anymore (which turned out to be untrue; he was looking for bigger sponsors and found them for the next year). Strangely, this course was hillier and harder than the famously difficult Boston course. I handled it well, though, because the hills are over by mile 15, and the last 10 miles are truer to Illinois’ flatlander reputation. By far the smallest race I’ve run: I came in 10th place out of 100 runners total. Talk about running alone out there.

9. 2016 Fox Valley Marathon, 3:24:38. Definitely the hottest marathon I’ve completed. A few thousand runners take part in this mid-September stroll along the paved path that lines both sides of the Fox River. The one part of the course that threw me off was from about mile 7 to mile 15, when runners are going in both directions of the out-and-back part of the race. Passing becomes a near impossibility. I had hoped to get under 3:25, and I barely held on during the last few very hot, very sunny miles. I did not order any of the official race photos because some dad invited his kids to run with him for the last 50 yards to the finish line, and my photos show me appearing to struggle keeping up with a 5-year-old girl and a 7-year-old boy. 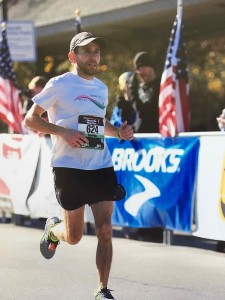 Probably the most relaxed I’ve felt at the finish of a marathon. And yes, that’s the same hat in each of the pictures; it’s pretty disgusting by now and should be burned.

10. 2016 Naperville Marathon, 3:17:11. Note that this was the fourth marathon I did in a 6-month span, and the fastest of the four (my 2nd-fastest overall). Sadly, this was the last running of this fan-friendly course. Serendipity helped me at this one: at the starting line, I bumped into my childhood best friend who grew up across the street from my parents’ house, and he asked me to pace him to a 1:40 half marathon. We ran together until he turned toward the finish (he broke 1:39), and I continued on. Frustratingly, some young runner wouldn’t let me catch up to him around mile 16; every time I tried to run next to him, he sped up. I settled in behind him until he started fading at mile 23, so I picked up the pace and ran my first successful negative-splits marathon (in which I ran the second half faster than the first). I thought I’d be around 3:19, and I was surprised to be nearing 3:17 at the end.