I was already nervous about returning to marathon shape after having injured myself so severely that I couldn’t run for 3 months (more on that later). Then things got weird. 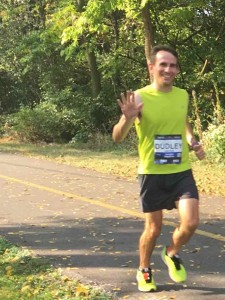 This is me the last time I ran the Fox Valley Marathon, September 2017.

About 4 weeks out from my first marathon in a year, I was gearing up for my last long run, a 22 miler that would give me an idea of what kind of condition I was in and help me practice my pace and other race-day logistics. A few days before the long run, my lovely wife Jen said casually, “Have I ever told you the story about how my friend convinced her boyfriend to shave his armpits because he had bad body odor and shaving your armpits keeps BO at bay?” I said, “Huh, no,” and she said, “Yeah, and here’s the kicker: Even after they broke up, he thanked her for that piece of advice! Isn’t that funny?” Then, a few days later, Jen said, “I was just laughing to myself about that story I told you, about my friend who convinced her ex-boyfriend to shave his armpits. And he thanked her for it after they broke up!” And once more, the next day: “You know my friend, the one who convinced her ex to shave his pits?” I said, “ARE YOU ASKING ME TO SHAVE MY ARMPITS BECAUSE I STINK?!? IF YOU ARE, JUST SAY IT!!!” She said calmly, “Oh, I mean, sure, if that’s something you’re interested in doing…”

So I found myself slathering shaving cream on my armpits and taking a razor to them that day. (Mind you, Jen and I first met in our teens on our high school cross-country team, and this issue had never come up in the ensuing 30-plus years. Maybe I should check if I have bad breath while we’re at it.) Now, I don’t know if you remember the first time you shaved a part of your skin; I have a hard time recalling because the only thing I’ve ever shaved is my face, and I was 13 when I started that. It’s been a long time. Anyway, what I wasn’t ready for was how freaking painful it was. Ouch! I cut myself pretty badly.

So then I ran the 22 miler. Oh, the chafing! It was not fun. But now I find myself a few days out from the race, and it’s too late to let my armpit hair grow back out to its natural, luxurious length. So I am stuck shaving. I said to Jen, “How often do I have to do this?” and she said, “Oh, not much, only every couple days.” “EVERY COUPLE DAYS?!?” So here we are.

Anyway, my injury. Last year, I ran three hard marathons, two in the spring (cough cough, Boston qualifier here), and one in October on a flooded course that messed with my stride as I high-stepped through multiple waterlogged parts. My recovery was fine, though. And then I did something stupid. 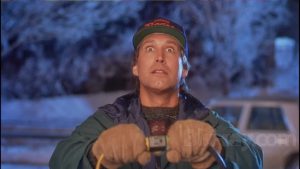 Actual photo of me getting the lights ready for Christmas.

My son was coming home from college the Tuesday before Thanksgiving. I thought it would be fun to surprise him by Clark Griswolding the crap out of our house. To get to the high peak above our garage, I decided to step out of a second-floor dormer window onto a sloping part of the first-floor roof. As soon as I did, I felt a twinge in my left hip. (Handy tip when listening to runners talk about running: when they use the phrase “I felt a twinge,” nothing good follows.) I scooted out to the edge of the peak, did the lights, then spent another 2 or 3 hours finishing the lights on the roof, some bushes, and a few trees. It looked great at night when the timers kicked them on.

The next day, I had to drive 8 hours round trip to get my son at college (Go Green! Go White!), and my hip felt sore after the drive. The next day, I ran 10 miles. The day after that, Thanksgiving, I did another 8 miles. And then my hip was so sore that I couldn’t run more than 5 miles without pain. I had trouble lifting my left leg, and when I ran, I slightly turned my knee outward to compensate for the pain. I was limping by the sixth mile each day. The limping became constant, and I couldn’t sleep at night because of the dull, aching pain. It felt as if something was out of place in my hip socket. There was also groin pain, rear-end pain, calf-muscle pain, and hamstring pain. So I decided to shut things down for a while.

“A while” went from 5 days to 2 weeks to the rest of the year. When I couldn’t start running without pain on January 1, I started to get concerned. By February 1, I was alarmed. By March 1, I said to Jen, “I think I need to see an orthopedic surgeon.” I was still eating a high-calorie diet in the winter, since I usually burn it off with running, and I gained some weight, too. It wasn’t like I ballooned up, but it was all in my belly to the “I can’t button any jeans, so I guess I will wear sweatpants everyday” point.

We have neighbors whose son had a similarly described injury when he was in high school, and they had told me, “As long as the doctor doesn’t say it’s a hip impingement and a torn labrum, you should be okay.” Their son had surgery for it, and it was awful: the hip had to be immobilized for a month, then physical therapy was challenging, and he wasn’t able to run at full speed for 12 to 18 months.

The surgeon examined me, took some x-rays, and said, “Well, I have good news and bad news.” I said, “Give me the bad news first; that’s the kind of guy I am.” He said, “You have a hip impingement and a torn labrum.” I said, “That’s terrible! And the good news?”He said, “You’re too old for the surgery to work!” I said, “I’m too old? That’s good news?” The surgery is effective up until age 45 in men, and after that it causes degenerative issues that lead to an earlier need for hip replacement surgery. Ugh.

Basically, the hip joint is a ball and socket, and the labrum is this material that stretches around it to keep it together. My labrum was partially torn. Usually, you’ll hear of torn labrums in the shoulder socket, like with baseball pitchers and football quarterbacks. It’s a repetitive motion injury. Obviously, pitchers and quarterbacks don’t run as much as marathoners, so they don’t typically tear their hip labrums. (If a QB is running a lot, it’s because his offensive line is bad; that’s another issue altogether!) And the hip impingement is sort of like the ball is partially popping out of the socket (and as I put this all together, I could feel my labrum then slipping into the socket and getting caught). 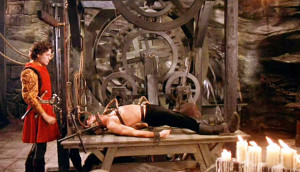 My best course was physical therapy and hopes and prayers. So I went through a month’s worth of physical therapy. If you’ve never undergone PT, picture the torture machine from the film “The Princess Bride.” PT was only slightly less brutal. I’m exaggerating, of course; my physical therapist was a lovely guy whose goal was to help people get back to their normal range of activities, and the fact that he enjoyed watching us suffer through his exercise routines was beside the point.

Armed with these routines, I was released from restrictions on my running, and I slowly started building back up to my normal speed and weekly mileage (emphasis on the “slowly”). I brought those PT routines home, along with some large rubber bands to help with the exercises, with the promise to do them at minimum twice a week. And how many times a week have I averaged doing them at home in the last 5 months? Zero. I’ve done zero. It’s pitiful, really. I like to do the running, but I am not a faithful stretching or workout routine guy.

Jen and I do a yoga-and-light-weights workout twice weekly, and I have had to drop a few of the yoga positions and stretches because of the stress they put on my hip (looking at you, Downward Facing Dog). And even moving the weights is a problem: I can do the shoulder presses and lat pulls and curls with the free weights, but when I put them back down on the floor, I have to be careful to turn my left leg so as not to pop the hip out of place again. (I don’t mean to brag, but I’m working with 17.5-pound weights here. I’m a regular Arnold Schwarzenegger.)

But there was a problem: before I injured myself, I had signed up for two fall 2019 marathons, a full year ahead of time. And they are nonrefundable. There was no way a cheapskate like me was going to miss out on running them. Plus, I need to run three more marathons to get to 20 overall. So I cranked up the training, but I have done hardly any speed work, and I have run literally no shorter races. I typically fit in several 5K races to test my speed and keep things fresh.

Here’s the schedule: Fox Valley Marathon, one I have done twice already, this Sunday. Then a local 5K, which I have won twice, 6 days later. Then the Chicago Marathon 2 weeks after that. This will be fun.

I am currently in the carbo-loading phase of my runner’s diet. (And by “carbo,” I mean m&ms, chocolate chip cookies, and ice cream.) I had been eating lots of protein these last few months, with the goal of (in the words of the writers for Men’s Health magazine) getting “ripped!” and “shredded!” and “jacked!” I don’t think it worked. But I did lose the belly fat. And my armpits are shaved like all the men in the magazine’s photos.

On Sunday, I go for it. The plan is to run a steady 8-minute-mile pace for the first 20 miles, and see how I feel in the last 6 miles. Unfortunately, I may have done some yard work that exacerbated my hip issue this week; I felt a twinge. Or maybe I am just paranoid. Either way, I am running this sucker. If you see me limping around town next week, you’ll know why.