I decided to wait until all the “Star Wars Episode VII: The Force Awakens” hoopla died down before I posted this story. (Let’s assume that getting beaten in the domestic box office by “How To Be Single” and “Zoolander 2″ equals no more hoopla.) As I explained in my year-end review of movies, I was a Star Wars kid growing up and thus will remain ever devoted to the Rebel Alliance. I blame my parents for having me in 1971, making me 6 years old when Episode IV was released.

I should mention that I am not a true Star Wars geek. I don’t delve too deeply into the Star Wars Expanded Universe or even the Star Wars canon, I don’t follow Wookieepedia, and I definitely do not want to get into an argument over whether Han Solo or Greedo shot first in the Mos Eisley cantina.  (There’s no argument because clearly it was Han.)

When I was a kid, my parents had a strict policy on toys: my siblings and I could keep them as long as all of our toys didn’t overflow out of the toy barrel. (My dad had played in a golf tournament organized by his company, and he won a plastic garbage can in the shape of an old wooden barrel. He turned it into a fun toy chest: “Here, kids, keep your toys in this garbage can. Make sure the lid stays on it.”) The four of us Dudley children were in charge of getting rid of any toys that did not fit.

Consequently, I usually got small toys as gifts. (Please, stop weeping for me. Somehow I made it to adulthood relatively unscathed.) And my favorite gifts were Star Wars figures. I would spend hours playing with them all over the house, creating storylines that I am sure don’t fit into any Star Wars canon. Example: Luke and Chewbacca get stuck in the toy barrel under my sisters’ Barbie dolls and have to blast their way out. (All the storylines ended with “and have to blast their way out.”)

Along the way, I picked up some random figures that were the same size as the Star Wars guys but were not from the movies. My favorites were the Fisher-Price Adventure People. My neighbor had way cooler ones than me, but my brother and I got one set that had a Jeep and another that had a motorcycle with sidecar. We played with those indoors and outdoors, and we slept with them (we had no shame).

Like all kids, we were a little rough on our toys, and not all of the Star Wars guys survived. The original R2-D2 had its legs broken off, but was replaced by a newer toy when my son was younger. The Adventure People vehicles are long gone. A few of the other Star Wars guys had their heads popped off. None of them are worth anything at this point, I am sure.

I bring this up because of an article in the Chicago Tribune on December 15, 2015, that highlighted the worth of older, well-maintained Star Wars toys. A recent auction fetched $505,202 for the sale of a collection of over 600 Star Wars toys, including $32,500 for a 1980 boxed set of Boba Fett, Han Solo, and Luke Skywalker figures. Yikes. The $25,000 sale of a Luke Skywalker with a double-telescoping lightsaber is no comfort to me: my Luke Skywalker was of the replacement single-telescoping kind, and the telescope on him and my Darth Vader broke off shortly after we got them.

My point: Let your kids play with their toys. They will destroy them, and that’s okay. You don’t want them to become like Al McWhiggin, the toy collector who stole Woody in “Toy Story 2.” They just might end up keeping those toys in their basement when they are adults, and then post an article about them. Complete with photos: 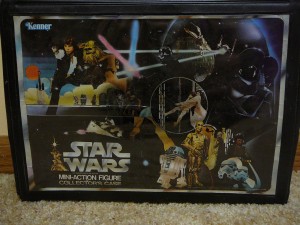 This was the carrying case for my Star Wars figures. It has two trays and can hold 24 figures. The figures came with a sticker so you could label their slot in the case. The trays flip over and have plastic pegs so you can stand the figures (there are round holes on the bottom of their feet). 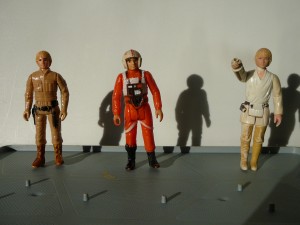 These are all Luke Skywalker. Left to right: wearing his Bespin fatigues, X-Wing Pilot, and the original. Note the missing lightsaber on the original. You could open and retract it. 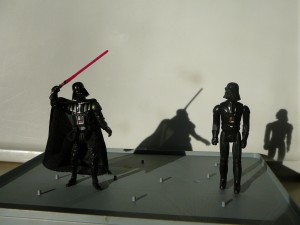 “Join me, and together we can rule the galaxy!” Darth Vaders from 2005 and circa 1977. Poor guy lost his cape and lightsaber. 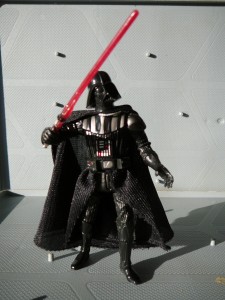 The arm on this 2005 Darth is spring-action. But it can never be lowered, so that’s annoying. 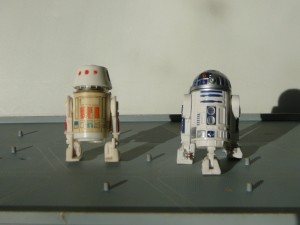 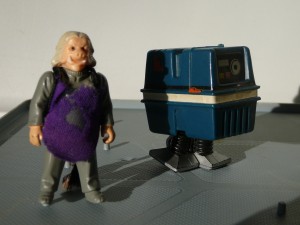 I’m pretty sure I said I wasn’t a Star Wars geek, but apparently I lied. This is an Ugnaught (left) and a Power Droid (right). 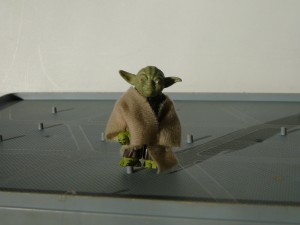 Oh, how I loved Yoda. He was short, smart, and funny. This figure came with a brown snake and a cane. I’m sure they were vacuumed up by my mom in 1983. 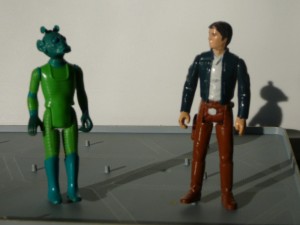 “Going somewhere, Solo?” “Yes, Greedo, as a matter of fact, I was just going to see your boss. Tell Jabba that I’ve got his money.” 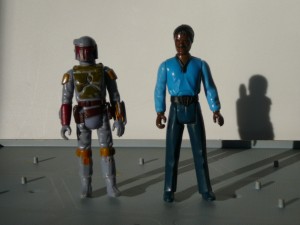 Boba Fett and Lando Calrissian. Lando liked to make the moves on my Princess Leia figure. (I lost the Leia figure just before I started dating girls. Might have been a correlation.) 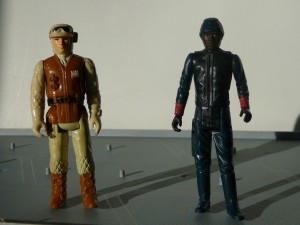 Okay, now we’re getting obscure. These are a rebel soldier in Hoth battler gear and a Bespin security guard from Cloud City. 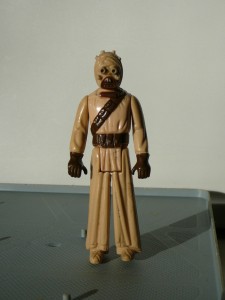 This is a Tusken Raider. (Labeled as “Sand People” on the original packaging, although technically it should have said “Sand Person.”) 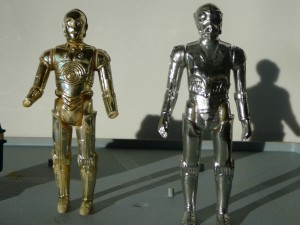 C-3PO and Death Star Droid. C-3PO’s hands broke off. Chewbacca probably did it. 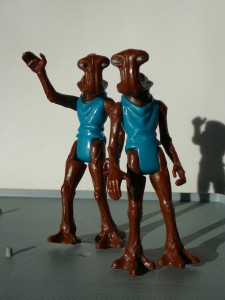 Hey, it’s Hammerhead! And his brother Hammerhead! (I’m guessing my parents got sick of hearing my brother and me fight over our toys and so got us the same thing once. Even though it was the ugliest of the Star Wars figures that we owned.) 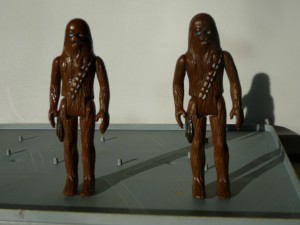 The Chewbacca Brothers. Mine was the one on the left. Just kidding. But not really. 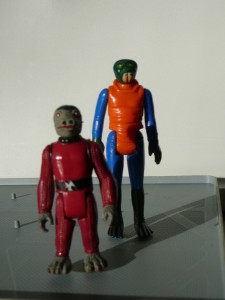 Maybe these guys were the ugliest figures we owned. Snaggletooth and Walrusman. 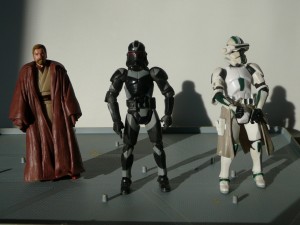 These are my son’s. Note the bendable legs and arms; clearly, that’s a 21st-century toy. Left to right, Obi-Wan Kenobi, Utapau Shadow Trooper, and Clone Commander. 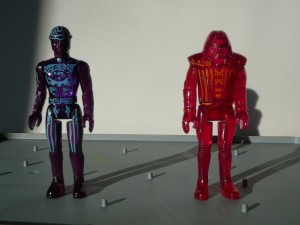 Original Tron figures. Made of translucent plastic. We welcomed all kinds in our game-playing. 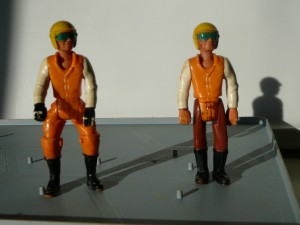 Fisher-Price Adventure People. These were part of the cycle racing team; the guy on the left sat on the motorcycle and the guy on the right went into the sidecar. 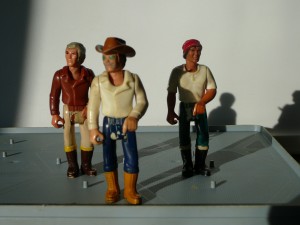 Adventure People. These were my favorites. Two outdoorsmen and a cowboy. They had a Jeep. Note that most of the Adventure People had left hands that could curl around any vehicle’s steering wheel. 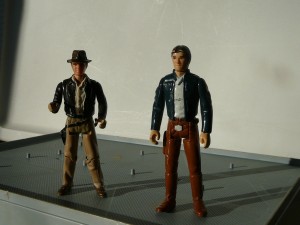 Harrison Ford as Indiana Jones (left) and as Han Solo (right). Indy had a whip, and his right arm is spring-action.