It’s Oscars weekend, so time once again for my list of the best movies I saw in the previous year. (Annual disclaimer: This isn’t a list of the best movies of 2018, but a roundup of the best films I saw, no matter what year they were released.) I saw 66 films in 2018, an average of 1 every 5.5 days. I’ve noticed a pattern over the last few years: I watch a lot of movies in the early months of the year, then I slow down in the summer months (kids are out of school, I’m doing yard work, a seasonal job that takes up my time), then it picks up in the fall. One exception is that my viewings spike in the 2 weeks after a marathon, when I am in recovery mode. (And by “recovery mode,” I mean “sitting on a couch and eating from a bag of chocolate chips.”) 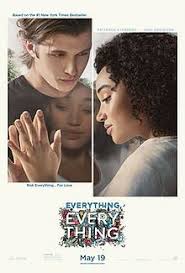 11. “Everything, Everything,” 2017 teen drama directed by Stella Meghie, starring Amandla Stenberg and Nick Robinson. The first of three movies based on a young-adult novel (also one of two starring Nick Robinson, see below), this film is about teenager Maddy, who has an immune disorder that leads her physician mother to quarantine her in their house, for fear that contact with the outside world will kill her. She develops a texting relationship with Olly, a new neighbor boy, and we see how far she is willing to risk her health to explore this friendship. 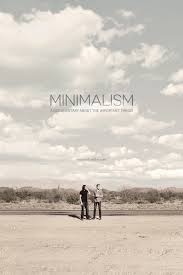 10. “Minimalism: A Documentary About the Important Things,” 2015 documentary directed by Matt D’Avella. This film could change your life, if you are open to it. It’s about compulsory consumption and why we (Americans, Westerners in general) are driven to buy things we don’t need. Specifically, we see two guys called The Minimalists, who have a podcast and have written books, talk about how to refocus your life on what is important (hint: it’s not the stuff you own). 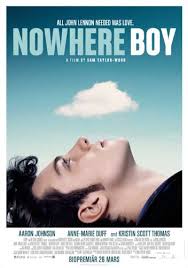 9. “Nowhere Boy,” 2009 biographical drama directed by Sam Taylor-Wood, starring Aaron Johnson, Kristin Scott Thomas, and Anne-Marie Duff. This story is loosely based on the early years of John Lennon, pre-Beatles fame. Although we see him meeting schoolmates Paul McCartney and George Harrison for the first time, it’s more focused on his messed-up family life (i.e., absent father, unreliable mother, strict aunt who acts as his guardian). You don’t have to be a Beatles fan to appreciate this film. 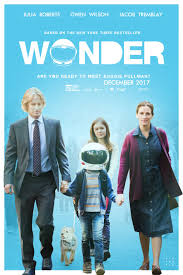 8. “Wonder,” 2017 comedy/drama directed by Stephen Chbosky, starring Julia Roberts, Owen Wilson, and Jacob Tremblay. This touching film (another based on a young-adult novel) is about Auggie, a boy with a rare facial deformity that has required 27 surgeries, who is about to enroll in a school after years of being homeschooled by his mom. It’s that rare film that you can see with your whole family and everyone will get something out of it. It deals with bullying, accepting people for who they are, parents struggling to let their children grow up, and confronting our fears. Stellar supporting cast, particularly Mandy Patinkin as the school principal and Daveed Diggs as the teacher. 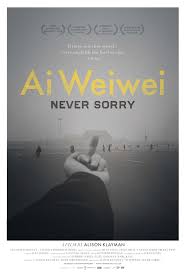 7. “Ai Weiwei: Never Sorry,” 2012 documentary directed by Alison Klayman. A great film about the Chinese artist, architect, and activist Ai Weiwei and the increasing hostility he faces from the Chinese government, as he is harassed, beaten, surveilled, and eventually arrested, all while his brand-new art studio is razed by Chinese authorities. What were his crimes, other than artistic provocation? Printing on his website the names of all 5,000 children who died in an earthquake in Sichuan, a disaster that the Chinese government had hoped to cover up. Inspiring story about true bravery. 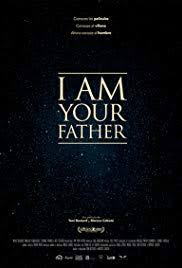 6. Tie: “I Am Your Father,” 2015 documentary directed by Marcos Cabota and Toni Bestard; and “Elstree 1976,” 2015 documentary directed by John Spira. These movies go together. They are definitely for the Star Wars fans among us. One focuses on the filming of the original “Star Wars,” at Elstree Studios in London in 1976, and captures the indie feel that the film had before it became a worldwide success. More specifically, it follows 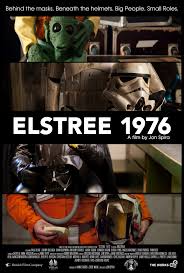 extras and ancillary support crew, who had no idea what they were signing on for. Similarly, “I Am Your Father” is about actor David Prowse, a fascinating former world-champion bodybuilder who portrayed Darth Vader in the original trilogy, and his falling out with George Lucas over the making of the movies. Essentially, he’s been persona non grata to the Lucasfilm folks ever since, and the directors would argue unjustifiably. If you saw “Solo: A Star Wars Story” and were disappointed (I liked it, but I’m sure you’re getting tired of seeing these movies on my best-of lists), you might want to check these out. 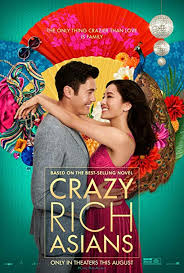 5. “Crazy Rich Asians,” 2018 comedy/drama directed by John Chu, starring Henry Golding, Constance Wu, Awkwafina, and a large ensemble cast. This was the “La La Land” of the year for me: a film that I heard so much about that I didn’t think it would live up to the hype. Well, I was charmed. It was funny, romance-filled, gorgeously filmed, and hit all the right notes on family and obligations in the face of love. One downside for me was that there were so many characters that we didn’t get to spend time with some people I would have liked to see more screen time of. 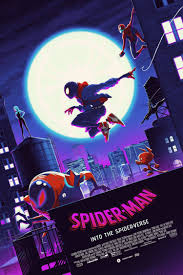 4. “Spider-Man: Into the Spider-verse,” 2018 animated sci-fi directed by Peter Ramsey, Bob Persichetti, and Rodney Rothman, featuring the voices of Shameik Moore, Jake Johnson, Hailee Steinfeld, Nicolas Cage, John Mulaney, and many others. This isn’t your typical cartoon. Not sure where to begin with the plot: Miles Morales gets bitten by a radioactive spider and becomes Spider-Man. Wait, I thought Peter Parker was Spider-Man. It turns out this is in an alternate universe, and when the bad guy (Kingpin, voiced by Liev Schreiber) creates a machine that rips open the fabric of the universe…okay, I’m losing the plot thread here. Just know that there are several Spider-Mans (and girls, and, um, pigs) from different universes involved. Visually amazing; I felt as if we were watching 1970s-era NYC graffiti come to life. 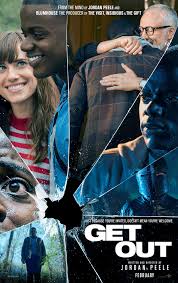 3. “Get Out,” 2017 satirical horror directed by Jordan Peele, starring Daniel Kaluuya, Alison Williams, Lil Rel Howery, Bradley Whitford, and Catherine Keener. Oh man, what hasn’t been said about this movie? I’m not a fan of horror movies, so I was surprised that this one got to me. While there were some horror-movie tropes (jump scares, bloody violence, “wait, didn’t he kill that guy already?,” things like that), the psychological suspense and cultural commentary parts were strong. This one will stay with you for a while afterward. 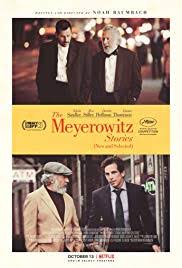 2. “The Meyerowitz Stories (New and Selected),” 2017 comedy/drama directed by Noah Baumbach, starring Ben Stiller, Dustin Hoffman, Adam Sandler, and Elizabeth Marvel. I’m a fan of Baumbach’s movies. Stiller, Sandler, and Marvel play siblings dealing with their aging father, the not-quite-respected artist and retired professor Harold Meyerowitz, played with aplomb by Hoffman. Stiller is the successful son, and Sandler (in his best dramatic role since “Funny People”) is the sad-sack who can’t seem to please his dad or live up to this father’s wishes, while dealing with his college daughter (Grace Van Patten). As with most Baumbach films, I’d describe it as painfully funny. 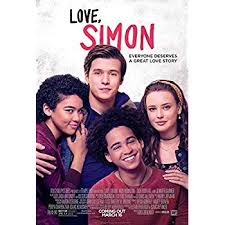 1. “Love, Simon,” 2018 romantic comedy/drama directed by Greg Berlanti, starring Nick Robinson, Jennifer Garner, Josh Duhamel, Alexandra Shipp, and Katherine Langford. The third movie adapted from a YA novel on my list, this one is sweet and uplifting. Simon is a teenager who starts an online relationship with another boy. A third boy finds out about the relationship and blackmails Simon into helping him get a date with a female friend of theirs, for fear of outing Simon. I thought of the John Hughes movies of the 1980s, and not because of the topics, but the “of its times” feel of the film. Example: the high schoolers swing by Starbucks to get coffee drinks on their way to school everyday. Another example: Well-meaning, loving adults who support but can’t really solve problems they don’t understand, specifically Garner and Duhamel as Simon’s parents and Tony Hale as the trying-to-be-hip vice principal.