Note: This is the third in a series of super-short stories about animals.

The first time I was attacked by a bird, I was running on country roads. I went onto the frontage road next to a highway. On the fenceposts, I noticed a few birds; they were black with red and yellow coloring on their wings. Cool, I thought. 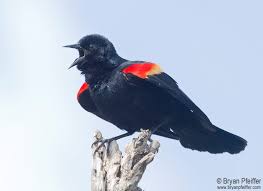 As I passed a small tree, I heard a bird making this noise: “Chit. Chit. Chit-chit-chit!” And then one of the birds swooped down and smacked me on the head! I was wearing a baseball cap, so I took it off and started swinging wildly at it while yelling, “Hey! Hey!” I looked up, and two of the birds were flying over my head, corkscrewing around in the air, and then divebombing me; there was something dizzying about the way they set me up for the attack. My long, slow jog turned into an all-out sprint as I swung my cap.

I’m picturing a family on a vacation in their minivan, driving down the highway. A child looks out her window and says, “Mommy, Daddy, there’s a man waving his hat at us, and birdies keep landing on his head.” And her mom says, “That’s nice, sweetie. Now go back to the movie on your iPad.”

When I got home, I said to my lovely wife Jen, “I was attacked by a vicious pack of birds!” She said, “What? Wow. How many were there?” I said, “At least two. Or maybe it was one, but the way it was spinning, it seemed like two.” Jen said, “Ohh-kayyy. Are you bleeding or anything?” I said, “No, I managed to fend them off with my hat.”

Needless to say, no one believed me. We have a friend who lives with us each summer, and she said, “I’ve been bicycling for years, and I know the birds you are talking about, but they don’t attack. You’re crazy.”

So I looked it up: the birds are red-winged blackbirds, specifically the males. And they do attack. (And I’m not crazy.)  From Wikipedia here: “Males have been known to swoop at humans who encroach upon their nesting territory during breeding season.”

We took a vacation out west, and all through Iowa, Kansas, South Dakota, and Wyoming, I kept seeing these evil birds sitting atop fenceposts, taunting me, waiting for me. “They’re not evil,” Jen said. “They just defend their nests.” “Oh, they’re evil,” I muttered under my breath.

A few years later, our summer friend reported that a red-winged blackbird bopped her on the bicycle helmet when she rode past its nest. Who’s crazy now?

I see them all the time on the canal towpath where I run. From mid-May to early July, they are aggressive. If they start “chit-chitting” as I approach, I clap my hands or cough loudly to scare them off. I also swing my cap.

Last year, I was running in the opposite direction of where the blackbirds normally are (not because I was afraid), and as I was trotting along, I felt this massive claw grab the top of my head. “Hey! Hey!” I yelled and started sprinting. I took my cap off and swung it around. After about 50 yards, I turned around to see what it was:  a huge owl was sitting in a tall tree above me.

I ran home. “Jen! Jenny! I was attacked by an owl!” I had her examine my head; there was no bleeding, just a scratch. I gave her the blow-by-blow account. She suggested that I need to put on a little weight because the owl could probably carry a tiny human. Ha ha, so funny I forgot to laugh.

When I shared my story with friends, I heard back that an acquaintance was also attacked by this same owl, but she actually was bleeding from the talon scratches. I saw her on the towpath a week later. She showed me her injuries. We both avoided that stretch of the path for the rest of the year. And I put on a little weight over the winter. Just in case.