Faithful blog readers, let’s play a fun game I like to call, “Let’s All Pretend There’s Not a Global Pandemic Shattering All of Our Senses of Well-Being and Keeping Us All on Edge.” Shall we?

If you live near me, this winter you may have seen me running around town with two beer cans in my hands. I told my lovely wife Jen that she should prepare for comments from co-workers and neighbors: “Was that your husband I saw with a Schlitz in one hand and a Truly hard seltzer in the other?” To clarify, I did indeed have two cans in my hands, but not for personal consumption.

First, some backstory: Around the time my older brother joined cross country in high school, my dad started running. There was a private country club in our town, and my dad would run on the street along the chainlink fence outside the golf course. (This is of course a metaphor for how close we were to being members there.) After every run, he would come home and exclaim, “You won’t believe how many golf balls I found today!” He would have balls in his hands or his pockets with random logos: Harris Bank, Schmerler Ford. He would place them on the kitchen counter, where they would roll all over and annoy my mom. Then he would pile these into his golf bag and use them when he golfed. My siblings and I would be like, “Can you believe Dad does that? Just leave the balls there and buy new ones! I hope nobody recognizes him as our dad!” I swore that I would not grow up to be the type of oddball who grabbed stuff from the roadside on his runs.

Flash forward 35 or 40 years: Because of all the winter snow and ice on the canal towpath I frequent, I ran most days on paved roads. You have to be careful of black ice and other hazards, but I feel safer doing it. The main route I took got me quickly out of the city and into the country. I run against traffic so that I can step off the road quickly when vehicles are coming toward me. 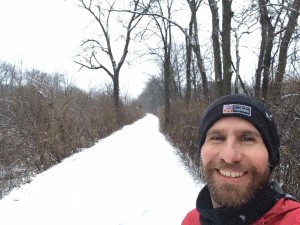 Here I am on a long winter run, before injuries wiped out my spring running plans. Oh, happy day!

Anyway, the particular route I took is, I’m guessing, the perfect dumping ground for teenagers who don’t want to get caught with beer cans. I have a neighbor who takes his aluminum cans to a recycler for cash, so I started collecting the cans for him. Each day, if I was wearing a jacket, I could stick one or two cans in the pockets, but at the very least, I would have two cans in my hands. Which made it awkward to wave to drivers: “Hi there! It’s just friendly old me, hydrating on my long run with a Four Loko and a White Claw!” Like an oddball. Or my dad.

One day, I counted the number of cans I saw on the side of the road. Really only a 3-mile stretch was in the country on my run. Do you know how many cans I saw? Take a guess. Higher. No, even higher. I saw 186 cans! Ridiculous! That’s about 62 cans per mile! That’s just crazy. So I picked up 2 to 4 cans per run, but I never got close to gathering them all, and more were added every weekend. To be fair to teens, it could be anyone of any age throwing cans out their vehicle windows. (Looking at you, White Claw-loving thirtysomethings.)

Also on this route is the Catholic cemetery. To add mileage to my runs, I would go in there and run on the paved path. There were a few headstones for people I know who are still alive. I guess it’s a thing to prepay for a plot and have everything but the end date added to your headstone. Um, creepy!

Some of you might recall that late in the fall of 2018, I injured my hip while “Griswolding” the crap out of my house with Christmas lights. That little niggling injury turned into a major setback from which I didn’t fully recover until September of 2019. I ran two marathons in the fall and wanted to use them as a springboard for more: more running, longer winter runs, possibly longer races.

The main problem that I have is that I’m not a high-mileage guy. Whereas elite marathoners average 70 to 100-plus miles per week, and runners at about my level average around 40-60 per week, I usually struggle with injuries if I exceed 30-35. But there’s that little voice in my head that keeps telling me that I should ignore my own experience and bump up the mileage. So every year, typically after my last fall marathon, I try it, and every year, I develop a new injury, probably related to my increased mileage.

So here’s what I did: I increased my mileage, eventually averaging 43 miles/week. I sometimes ran on ice and snow; the towpath is well marked and relatively straight, and I didn’t want to run on country roads on my longest runs, which were 19 and 21 miles.

I shouldn’t have been surprised when an old injury flared up: my iliotibial (IT) band became excruciating on March 6. By March 11, it was clear that I should shut things down for a while. The IT band is a fibrous band runs from the top of your hip to the outside of your knee; when the pain is worse, your knee kills and is tender to the touch. It hurts to run, it hurts to walk, it hurts while sitting. It’s difficult to sleep; it loosens up after about half a day of movement, so it is worse in the morning. What causes it? Lengthening or altering your stride (typically, in winter while on ice or snow); running on unstable or uneven surfaces, which causes your leg to be unsteady with every step (ice or snow); and not being careful while gradually increasing mileage (I thought I was).

I swear I was even deliberate with my physical therapy, but now I know that I need to add some extra exercises to help it. What helps in the recovery? Rest is the most important step. When I first injured my IT band, in 2013, I had to take 2 solid weeks off, and then limit my runs to 2 or 3 miles a few times a week. It took 9 weeks (yikes!) to get back to normal.  What else helps is strengthening your glutes and your core.  (It seems that everything goes back to the core when it comes to injuries.)

When it first flared up, I decided to use a foam rolling tube. I was lying down on the tube on my left side, rolling my leg up and down the tube. Jen walked in and was like, “What are you doing?” It hurt a lot, and I said, “I’m (argh!) rolling out my (grr!) IT band because (ouch!) I read on some guy’s website that (ow!) rolling is beneficial (aagh!).” Jen said, “That doesn’t look good.” I said, “Trust me (argh!). I know what I’m doing (grr!).” The next day, I read on an actual medical website that maybe you shouldn’t roll it while it’s flared up. Oopsie!

(This might be a good time to mention my shoulder injury. Last September, I was digging out the rootball of a dead peach tree in our yard. I kept jamming the pointed blade of my shovel into the thick roots, over and over again. The next day, my shoulder killed. It felt, oddly enough, the same as when I tore the labrum in my left hip. It turns out I tore the labrum in my left shoulder. Instead of going for physical therapy or surgery, I chose to rest it. Seven months later, it’s better, but I still have limited range of motion. Take your left hand and reach it behind your right shoulder; you can probably touch your back, right? I can only reach over to the top of my shoulder. There go my dreams of being a major-league pitcher.)

So, no running for a while. Time to heal. I had signed up for 4 marathons this year, and so far, one of the spring ones has been moved to the fall; no word yet on the other one, but I would be shocked if it gets staged in early May. Which, as sad as that is, means that my rest time corresponds with this pause on all my planned races.

If you see me around town now, I’m the guy on the bike, riding alongside my daughter or Jen as they run. And definitely no beer cans in my hands. At least not yet.