Can somebody poke a stick in 2020 and see if it’s really dead? I’ve procrastinated on doing my year-end book and movie lists because I can’t shake the feeling that we’re still slogging through last year. For the second year in a row, I got bogged down in a book that took me a ridiculous amount of time to read. Plus, it didn’t even make the list! (It was a feel-bad-about-what-we’ve-done-to-the-world New York Times bestseller with the subtitle A Brief History of Humankind. It was not brief, and it was not kind to humans.) I spent a lot of time reading up on the global pandemic and not enough on reading books for enjoyment; I read 23 books, or one every 15.9 days. Anyway, here are the ten best books I read last year: 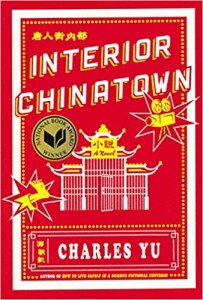 1. Interior Chinatown, Charles Yu. This novel is either (a) the story of Willis Wu, an actor who can only get certain “Generic Asian Man” jobs in film (and never the leads) because he is of Asian descent, or (b) the screenplay for a kung fu movie in which Willis acts, filmed in his Chinatown neighborhood, or (c) the inner thoughts of an actor on the set of a buddy-cop TV show, or…There’s a reason this book won the National Book Award for Fiction last year. Funny, imaginative, deals with deeper issues like immigration, racism in Hollywood and the wider world, and how assimilation affects different generations of a family. I kept thinking, “Ah, now I know what’s happening,” and then things would change again. 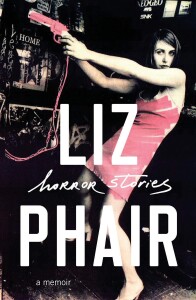 2. Horror Stories: A Memoir, Liz Phair. Phair is a Chicago-raised musician who came to fame with her 1993 Exile in Guyville album, and anyone familiar with her stuff would not be surprised to know that this is not a typical celebrity name-dropper memoir. It’s a nonlinear recounting of dark moments in Phair’s life (there’s a reason the title is not Happy Stories), and she’s never more clear-eyed than when she examines her own failings. (In recalling an affair that ended two marriages, she says of herself and the other guy: “We both wholly and totally suck as human beings and we know it.”) She doesn’t talk much about her songs, which is fine; she speaks especially to young women who need to hear how to navigate a world (specifically, the music industry) that doesn’t exactly roll out the red carpet for them to show their talents. 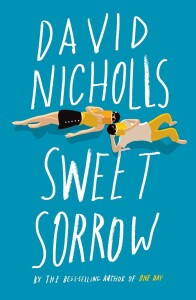 3. Sweet Sorrow, David Nicholls. I can tell how much I’m enjoying a book by how frequently I want to interrupt my lovely wife Jen and read her the funny parts from it. I did that a lot with this one; I kept saying, “You should read this book, but let me tell you about this one section.” Eventually, I told her the whole plot and the ending. (Ruining books and movies for my wife; that’s part of my rascally charm.) In Nicholls’ book, Charlie Lewis is about to get married in London, but he gets invited to the 20-year reunion of a theater troupe that he belonged to one summer when he was 16 years old. In flashbacks, we hear the story of how this directionless kid with a falling-apart family follows a girl into a building and gets talked into acting in a local production of “Romeo and Juliet.” There are really four or five stories going on here, and Nicholls jumps back and forth, leaving us wondering what happened in his relationships with his father, his friends, and his teen crush, and what’s going to happen to him at the reunion and with his fiancee. 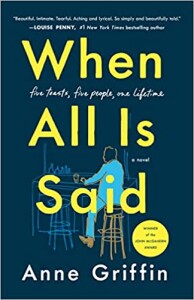 4. When All Is Said: A Novel, Anne Griffin. 84-year-old Maurice Hannigan sits down at a hotel bar in his small Irish town and, throughout the course of an afternoon and evening, offers five silent whiskey toasts to the people who have meant the most to him in his lifetime. We hear the story of his life, his loves, his regrets, and one secret that he has kept since his teen years that changed the course of two families for generations. Hard to believe that this is a debut novel.

5. What Makes Olga Run?, Bruce Grierson. My neighbor loaned me this book because she knew I’m a runner and would like it. The hilariously long subtitle says it all: The Mystery of the 90-Something Track Star and What She Can Teach Us About Living Longer, Happier Lives. Grierson is a reporter who had heard about this nonagenarian track star, Olga Kotelko, and how she kept getting faster and stronger as she aged. He convinced her to allow him to put her through a battery of tests (physical, DNA, mental) to see if he could find the keys to her astonishing accolades and longevity. (At the time of the book, Olga held 23 age-group world records in track and field events.) Was it her genes? Her exercise? Her diet? Where she lived? A fascinating story of one woman’s life and how her resilience shaped her success.

6. Enemy of All Mankind: A True Story of Piracy, Power, and History’s First Global Manhunt, Steven Johnson. I love reading good pirate stories, and this one’s about the seventeenth century’s most notorious pirate, who has somehow been all but forgotten. Henry Every commandeered a ship on which he served, aimed it toward India, and led a ruthless assault on an Indian royal convoy that led to one of the most lucrative robberies in seafaring history. The worldwide manhunt and bounty that the British government placed on his head led to the first global effort to stop piracy, and in the process, the British and Indian governments’ and the British East India Company’s roles in the outcome changed the course of world history and led to the rise of multinational capitalism. Think I’m exaggerating? Then read the book!

7. True Grit, Charles Portis. I had watched the original movie version of this 1968 book, with John Wayne as one-eyed US Marshall Rooster Cogburn, helping a 14-year-old Mattie Ross avenge her father’s death at the hands of his farmhand, Tom Chaney. The John Wayne version had a lighter tone than the Joel and Ethan Coen-produced remake; I heard that the book had way more humor than one might expect after watching the films. Portis’ only western novel tells the story of an elderly Mattie Ross recounting what happened in her childhood in Arkansas in the 1870s. After Chaney kills her father, young Mattie seeks out the toughest lawman she can find, and matches up with Cogburn. A Texas Ranger named LaBoeuf, who has been tracking Chaney, comes along, and they end up taking on the notorious Ned Pepper gang. A dryly funny page turner.

8. Less, Andrew Sean Greer. This Pulitzer Prize winner tells the story of Arthur Less, a (mostly failing) novelist about to turn 50, who gets an invitation to his ex-boyfriend’s wedding. Seeking an excuse to avoid it, he decides to say yes to an unusual series of adventures that take him around the world, from Paris to Morocco to Berlin to India. A picaresque novel that was a great summer read during my travel-free quarantine summer.

9. Nature’s Best Hope: A New Approach to Conservation That Starts in Your Yard, Douglas W. Tallamy. Did the subtitle already put you to sleep? Well, wake up, America! Because Tallamy proposes a new national park, one that stretches from sea to sea and runs through every homeowner’s backyard. Dubbed Homegrown National Park, it would create conservation corridors that would help stave off the extinction of animal life that is crucial to keeping our ecosystem thriving. He connects the reader to an online database that will tell you which native plants that you can plant in your backyard that will support the most diverse and abundant wildlife (hint: in almost every region of the country, it’s the oak tree). An engaging read that has me rethinking some of the plants I have in my yard. (The evil ornamental pear tree in my front yard is on his no-no list.)

10. Star Wars From a Certain Point of View, various authors. This collection of stories was written to celebrate the fortieth anniversary of the Star Wars saga and contains 40 different stories from (mostly) minor or as-yet-unexplored characters from the Star Wars universe. This is really for Star Wars fans who would like to hear what was going on in the mind of, for example, a Jawa on the sand crawler that found C-3PO and R2-D2 in the desert on Tatooine and sold them to the Skywalkers. The stories range from humorous to eerie to surprisingly heart-wrenching. A great tapestry of scenes that weave together all of the main Star Wars stories, and there are a few sections that provide new information that will enter the Star Wars canon.

Books that just missed the top ten: New Waves, Kevin Nguyen; The $64 Tomato, William Alexander; On the Clock: What Low-Wage Work Did to Me and How It Drives America Insane, Emily Guendelsberger; What Are You Going Through, Sigrid Nunez; A Very Punchable Face, Colin Jost.